One of the most consistently invigorating experiences I've had while learning to code is the joy of learning a seemingly small idea, then later learning how you can build on that initial concept in a super cool way.

The latest instance of this has been with CSS Variables. As a beginner, I always appreciated posts that explained concepts — so now I'm going to do that!

The Basic Structure of a Webpage

Imagine a basic website with pictures and words. HTML (Hypertext Markup Language) is the coding language that creates the websites layout and underlying content. CSS (Cascading Style Sheets) is the coding language used to add styles to the original HTML code. It's a relatively controversial coding language, full of debates about whether it's even a real programming language. Personally, I love it because it's incredibly literal. Do you want to change the colour of something?

Or maybe you want to change the size of a font? Font size will do the trick.

HTML without CSS looks the same regardless of content — for Google, Twitter or this blog. CSS is (part of) what differentiates the design, style and brand of websites and products.

Here's an Example of A Basic Webpage Without CSS 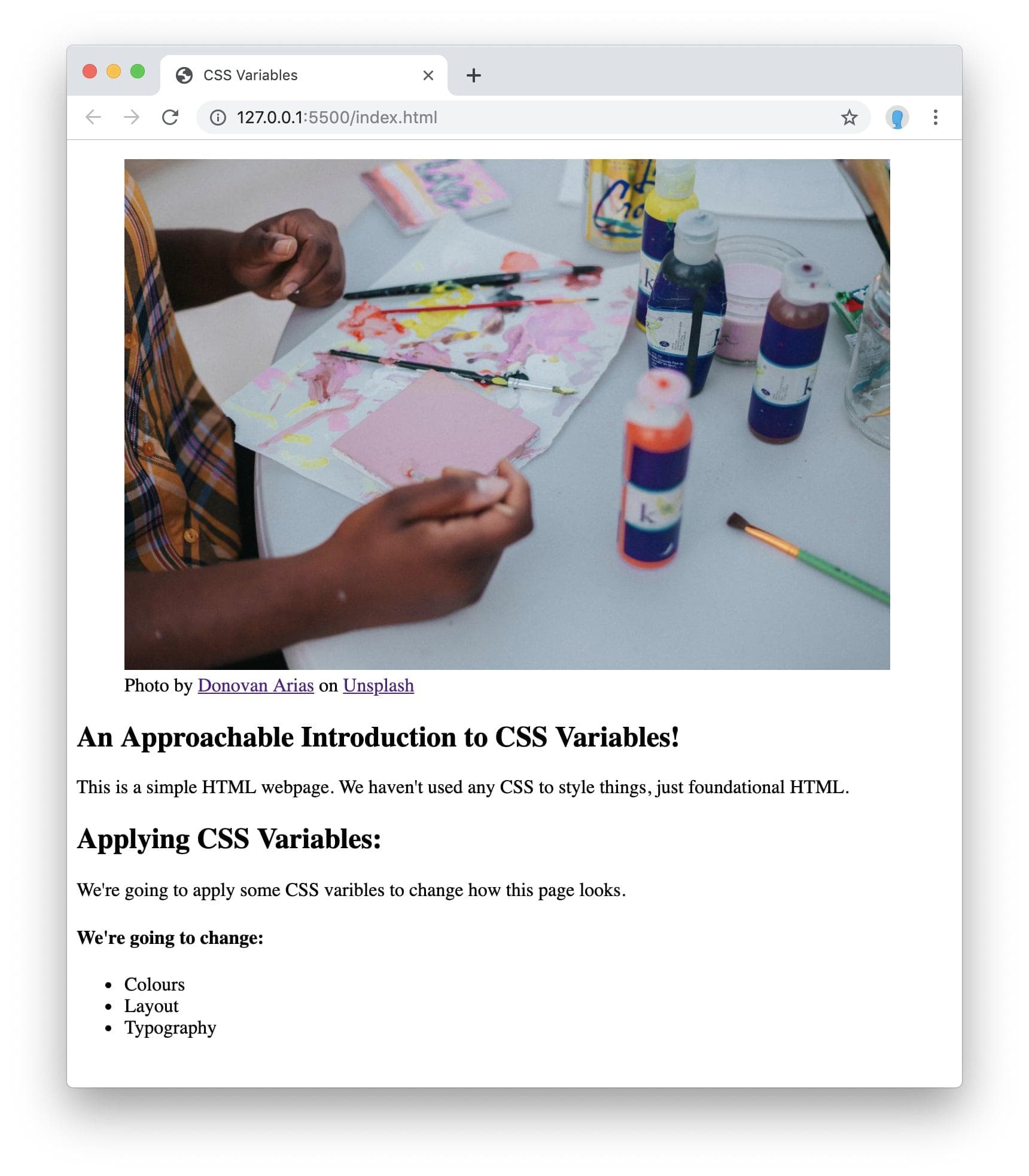 CSS Variables take things to a whole new level. CSS Variables store CSS values in keywords that can later be re-used as many times as you need. CSS Variables follow the same structure you might have learnt about in High School Algebra. I definitely failed High School algebra, potentially contributing to me being slow to pick up CSS Variables, but regardless — similar to Algebra, CSS Variables are assigned by associating a value with the variable name. For example, if we have a math problem such as Z = XY and we know that two of the values are X = 10, and Y = 5, then we can calculate Z as the result of X * Y. Luckily, there's less math involved in CSS Variables than that, but the general principle of storing a value is the same.

CSS Variables store CSS values in keywords that can later be re-used as many times as you need.

For example, if I had a particular colour that I wanted to use multiple times in the future, I could set that colour as a variable.

Setting a CSS variable: (I don't know why the blue hex code is red, I promise it's blue!)

A Gist of the CSS Variable 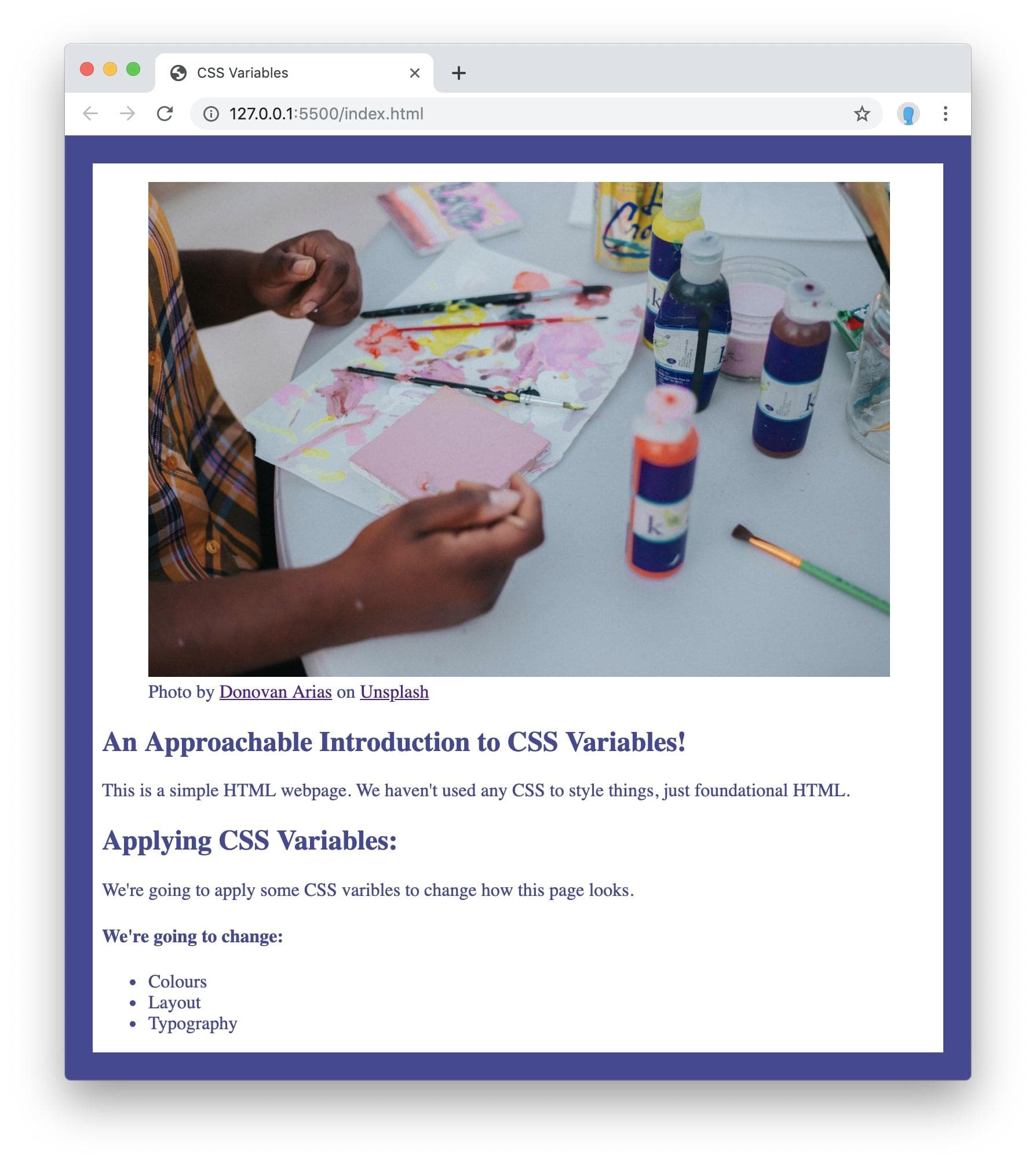 This concept of using the same variable, again and again as needed has been very compelling and is a technique I've started trying to use on every project. I was probably a bit slow to the Variables party (because of the previously discussed algebra issues). That aside, once I understood how it works, I've become a huge fan. Mostly because it just makes sense.

Today's revelation, however, (dramatic music) changes everything. While thinking about my favourite design methodology (the 8-px grid), which uses multiples of 8 for spacing and layout decisions, and once again wishing I had memorised my maths times-tables all those years ago, it occurred to me — hang on. If you can set colour Variables, what else can you set?

And that moment is how I realised computers could do the math for me. I can set numbers to Variables. Now, all of my x8 times-tables math problems have been solved.

Using CSS Variables I can set the a few relevant spacing Variables, then re-use those values as I need throughout a design. This builds consistency directly into the design — and ensures a smooth transition if sizes need to be tweaked later on. It also means I can much more easily use CSS calc() to calculate values on the fly from base Variables.

A GitHub gist showing how to assign size variables 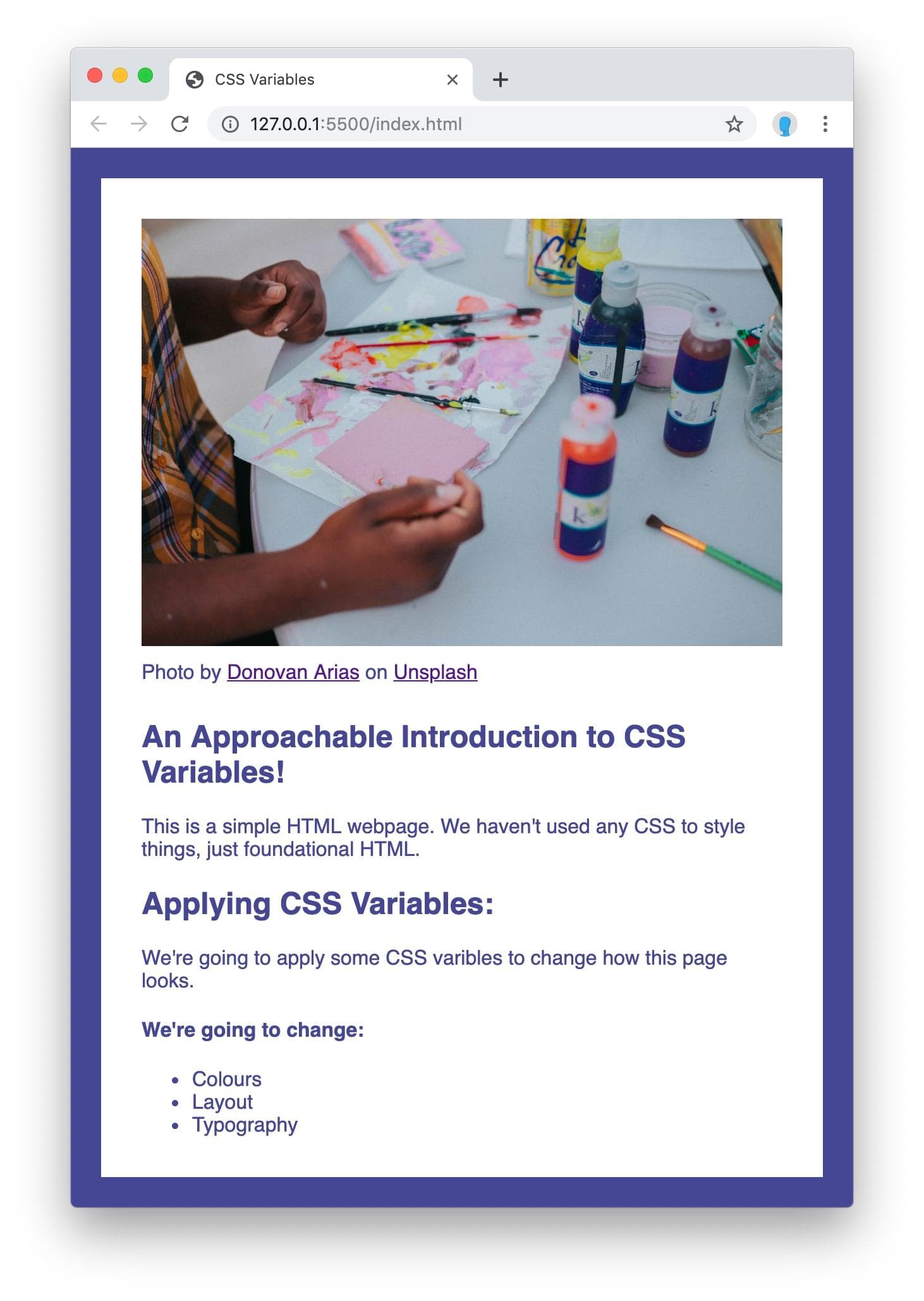 With that, we're left with something closely resembling a real website. We've used a single colour (that we can change easily, just by changing the initial variable) and we've got consistent spacing throughout the page.

Admittedly, while typing this out it DOES feel like I should have known all of this from the start, but it's tough to see what you don't know. But, I know now — and that's fricking cool and all that matters. Plus, now you know too! Mostly, I'm excited to see what else I can do with CSS Variables in the future.

GitHub Links from this Article

And, a few additional resources for those brave adventurers who want to learn more